How the Romans Lost Their Republic 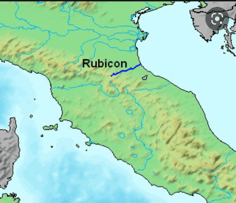 In 49 B.C., General Gaias Julius Caesar led the 11th Legion across the Rubicon River, little more than a small stream, in Northern Italy.  Under Roman law, any general who marched his troops across the Rubicon - thereby threatening Rome - was automatically guilty of treason and subject to the death penalty.

The resulting Roman Civil War did not go well for the forces of the Senate.  A year later, at the Battle of Pharsalus in Greece, Caesar led his legions against the much larger army of Pompey, fighting for the Roman Republic and the Senate.

With the opposing legions locked in a death struggle, shield wall to shield wall, Pompey took his calvary and tried to turn Caesar's right flank.  Unbeknownst to Pompey, Caesar had a cohort, armed with pila (spears), hidden and waiting.  When Pompey's horsemen ran onto this wall of spears, they retreated in chaos, crashing into and collapsing Pompey's left flank.  Caesar promptly rolled up Pompey's left flank and routed the much larger force. 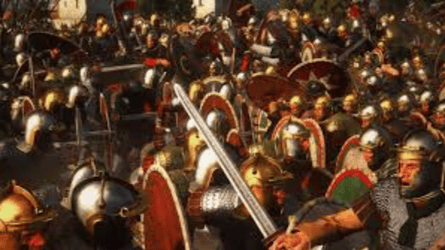 The adopted son of Caesar, Brutus, surrendered, as well as numerous other Senators, who had fought alongside Pompey.  They were all immediately pardoned by Caesar and welcomed back as prodigal sons.

But the Battle of Pharsalus marked the end of the Roman Republic.  While the Senate continued on in name only, it no longer had any power.  Rome had become a dictatorship, with all of the real power held by Caesar and his successors.  The Senate was just a figurehead.

And it was all for nothing.  The Roman Civil War never need to have happened.  Unfortunately, a great many members of the Senate hated Caesar with an irrational passion.  They were afraid of his military and financial power.

Years before, Caesar had been appointed Governor of the Roman province of Cisalpine Gaul.  He picked a fight with a nearby tribe of Gauls, so he asked the Senate for permission to raise a legion, at his own expense.  Once granted permission, Caesar quickly stomped the tribe, made its people slaves, and then sold off these slaves for a vast sum of money.  War, in those days, could be exceedingly profitable.

Now one of the richest men in Rome, Caesar, without permission, started raising even more legions and conquering even more tribes in Gaul.  He sold off the slaves for Bill Gates kind of wealth, sponsoring great gladiatorial games and feasts in Rome.  This made the people of Rome love him, but it freaked out his political enemies even more.

While Caesar was finishing with the conquest of Gaul, gaining even more slaves, more wealth, and more power, his enemies started to file lawsuits.  Some claims were legitimate, but others were pure fiction.  In those days, Rome suffered a huge gang problem.  Caesar's gang, armed with clubs, would often battle against the gangs of his political enemies.  People were hurt and even killed.  Not all of the claims against Caesar were shams. 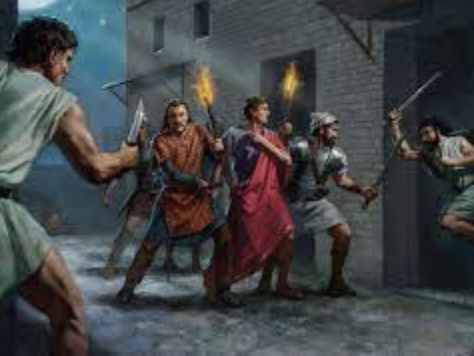 The judicial system in Rome at that time was incredibly corrupt.  Judges would openly hold bidding auctions for their decisions.  False testimony was only a matter of money.  Once the courts got ahold of Caesar, he would be executed within a week.  "His gang killed my husband."

Fortunately for Caesar, governors could not be sued, as long as they remained in office.  Therefore, the enemies of Caesar petitioned the Senate repeatedly to declare the term of his governorship of Gaul ended.

Eventually his enemies prevailed.  He was ordered to disband his eight veteran legions and report for trial before the Senate.  Uh, huh, sure.  This was really going to happen.  The members of the Roman Senate were smoking that California oregano. 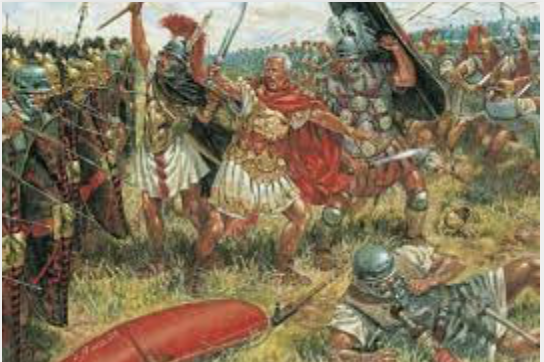 Now scroll forward 2,070 years and imagine the following scenario.  In 2023, old man Biden is asked to retire.  This could easily happen.  Kamala Harris assumes the presidency for a year and then runs against Trump in 2024.  A vengeful (but unwise) Trump has promised to try Harris for treason for allowing the invasion of illegal immigrants over the border.

President Harris loses the election to Trump, and she is now faced with Caesar's dilemma.  Does she quietly resign the presidency and submit herself to a treason trial, with a possible sentence of death?  Or does she cross the Rubicon?

Folks, no matter if you are liberal or conservative, it is exceedingly unwise for this country to pursue ex-presidents.  We want them to step down quietly and to fade into the sunset.  George Santayana, a Spanish philosopher, essayist, poet and novelist, once said, "Those who cannot learn from history are doomed to repeat it." 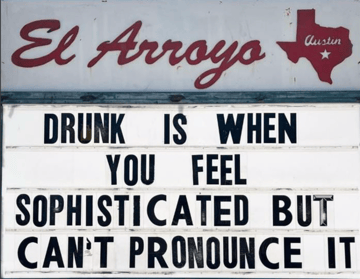