Below you will find my latest Investor Letter, our monthly newsletter to our 1,000+ private commercial mortgage investors, somewhat similar to Warren Buffet's annual letter to his shareholders.  I hope you enjoy it.

Nobel Prize-winning economist, Milton Friedman, is known to be the one who coined the term, “helicopter money”, in the now famous paper, “The Optimum Quantity of Money”, where he included the following parable:

“Let us suppose now that one day a helicopter flies over this community and drops an additional $1,000 in bills from the sky, which is, of course, hastily collected by members of the community. Let us suppose further that everyone is convinced that this is a unique event, which will never be repeated.” -- Milton Friedman

Now I have been blessed – truly blessed (thank you sooo much!) – by loyal investors who have stuck with Blackburne & Sons for more than twenty to twenty-five years. If you happen to be one of these old-time investors, I have three comments: (1) God bless you for your loyalty and your trust. The Great Recession was pretty awful, but together we limped through it; and (2) darn, we’re getting old, ha-ha; and (3) you may faintly remember that, long before Ben Bernanke was ever appointed Fed Chairman, I pointed out in one of our Investor Letters perhaps the most important economic speech given in our lifetimes, a speech made by then Fed Governor (but not yet Fed Chairman) Ben Bernanke, in November of 2002 to the National Economist Club in Washington, D.C., entitled “Making Sure ‘It’ Doesn’t Happen Here”:

“… the U.S. government has a technology, called a printing press (or, today, its electronic equivalent), that allows it to produce as many U.S. dollars as it wishes at essentially no cost. By increasing the number of U.S. dollars in circulation, or even by credibly threatening to do so, the U.S. government can also reduce the value of a dollar in terms of goods and services, which is equivalent to raising the prices in dollars of those goods and services. We conclude that, under a paper-money system, a determined government can always generate higher spending and hence positive inflation...” -- Ben Bernanke

The “It” in the name of the above speech is deflation, and back in 2002, Japan had recently completed the first of its two Lost Decades. Let me state, for the record, that there are times when I am an absolute idiot. There has also been a few times, however, when I have accidently stumbled upon an observation that, in hindsight, looked pretty prescient. Making a special note of the above speech by a then obscure Fed governor was one of my luckier moments.

“Politicians are people who, when they see light at the end of the tunnel, go out and buy some more tunnel.” -- John Quinton

Okay, so why is everyone - especially commentators on the European economy - talking so much these days about “helicopter money”?

The answer is because quantitative easing and negative interest rates have not been enough to jumpstart the economy of the European Union. The economy in Europe is sluggish. The money supply refuses to grow, even with the European Central Bank (“ECB”) buying up trillions of Euros worth of sovereign bonds (a fancy word for bonds issue by a country, like Italy) and even with the ECB buying up trillions of Euros worth AAA and AA-rated corporate bonds. Inflation just won’t stay lit.

When we take our dog on a car journey, we carry his drinking water in a gin bottle. On one occasion we stopped for lunch and let him out of the car. Pouring some water from the bottle into his bowl, I noticed a man watching with fascination. He came over to me and whispered, "I hope that you're not going to let him drive!"

Why won’t inflation ignite in Europe? In school we were all taught that when the Fed (or the ECB in the case of Europe) pumps money into the system that inflation was the result. In truth, this lesson is an over-simplification. The money supply only grows if banks are willing to lend and borrowers are willing to borrow.

In the United States, we recapitalized our banks - gave them cash to rebuild their loan loss reserves and their capital (the dough left in the bank to act as a further cushion against losses). Do you remember TARP? That was a $700 billion bailout of U.S. banks. It was pretty controversial at the time, but in hindsight, it was the right move. Most of that money was eventually paid back to the Treasury by the banks and by AIG Life Insurance Company. 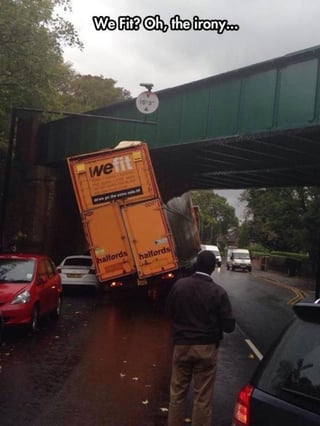 Bam! Oh, my goodness, what was that??? That’s the teacher’s yardstick slapping the desktop. “Pay attention,” my professors used to say, “This is on the test.” The European Union did not recapitalize its banks. Hundreds of billions of Euros worth of loan losses from the Great Recession have still not been written off by European banks. Many of the largest banks in Europe – including names like Deutsche Bank and Credit Suisse – are very weak. Weak banks tend not to lend money out like crazy.

In order for inflation to ignite, banks need to be willing to lend.

According to my favorite economist, Ben Bernanke, “The U.S. government has a technology called a printing press… (and) under a paper-money system, a determined government can always generate higher spending and hence positive inflation.” If banks just won’t lend and borrowers just won’t borrow, the ECB can always drop one-hundred Euro bills from a helicopter.

If I were the head of the ECB, I would distribute one-trillion Euros between all of the countries of the European Union and insist that they use this dough to put a solar panel on the roof of every home and every commercial building in the union. This move would be considered a helicopter drop.

You have a real estate or mortgage web site, right?  Open up your home page, create a link that says, "Commercial Mortgages" or "Commercial Loans", point this link to http://www.C-Loans.com, and Voila, you're done.  Now forget about it.  It may be one year or two years or three years, but if your site enjoys some good traffic from wealthy real estate investors, you might get a call like this (true story!):

"Are you Mr. Alan Dunn?  Guess what, Alan, I have some very good news for you.  I have here a referral fee check for $21,250.  An investor visited your web site while you were sleeping and clicked on your "Commercial Loans" link.  He came to C-Loans.com and filled out a loan application for a $17 million land development loan.  The deal closed!"

Our software is programmed to automatically capture the referring URL (the address of your website), and that URL is printed at the bottom of every C-Loans application that came from your site.  When the deal closes, we look up the owner of the referring URL and pay him a nice fee.

There is nothing more to the process.  You do NOT have to notify us that you have created the link. You do NOT need any special partner code.  Just create the link and point it to C-Loans.com.

"But George, how do I know that you won't cheat me out of my fee?"

There are times - especially after a big loan payoff - when there is over $3 million sitting in our loan servicing trust accounts.  We literally make our living based on trust, and this is the start of our 37th year in business.

And folks, if you are going to the trouble of adding a link to C-Loans.com on your website, why add just one?  If it were me, I would add a "Commercial Financing" tab at the top of the page, a "Commercial Loans" link on the left or right side, and a "Apply For a Commercial Real Estate Loan" link in the footer.  Any new page I added after this first one, I would make sure that it had the same links.  Why not?  Why not increase your chances of catching the idea of a commercial real estate borrower?

Got a commercial loan request that deserves a low-rate loan from a life company, commercial bank or conduit?