Commercial Loans and Properties on a Hill 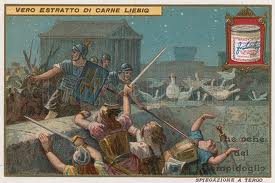 In the year 390 B.C. - two-hundred-ninety years before the birth of Julius Ceasar - Rome was just a small city-state.  We are not talking about the Roman Empire now.  The Golden Age of Rome would not happen for another 350 years.  We are talking about Rome when it could barely sprout whiskers.

The Gauls (barbarians from modern-day France) had invaded Italy, and they were marching on Rome.  A formidable Roman Army marched out to meet them ... and the Romans got their butts kicked (Battle of Allia).  A handful of Roman survivors streamed back into the city, bringing the ill-tidings.  The population of Rome, already fearing the worst, was packed and ready to go.  Almost the entire population fled south, taking with them their valuables.

The Gauls poured in, raping and killing anyone they found still in the City.  A handful of survivors took refuge at the top of the Capitoline Hill of Rome, where they built barricades of wood, stone, carts, and anything else they could find.  For days the Gauls stormed that hill, only to be driven back, with heavy casualties, by the handful of survivors.

Then the Gauls settled in a for siege, where days passed without further fighting.  The Roman survivors were lulled into complacency.  In middle of the night the barbarians crept up a narrow, hidden path to the top of the hill, where they silently dispatched the guards.

SUDDENLY a gaggle of geese was disturbed, and they began to HONK and HONK loudly.  Awakened from their slumber, Roman soldiers, old men, and young boys rushed to the imperiled battlements.  Desperately fighting for their wives, mothers, and children, the valiant defenders drove the Gauls off the walls and back down the hill.

Several weeks later a Roman relief army broke the siege, and the near-starving Roman inhabitants were saved.  For the next 800 years, geese were considered sacred in Rome.  If you look carefully at the illustration, you'll see the sacred geese squawking up a storm.

"Wow, George, that was an exciting story, but what does it have to do with commercial real estate finance?"

For the reasons described here today, real estate on hills almost always sells at a large premium compared to real estate in the flatlands.  The good views available from real estate on a hill are an equally important reason, but there is always the thought in the minds of the wealthy, "The barbarians are coming.  Barricade the road!"

Continue to be on the look-out for that old business card of that banker you picked up eight months ago.  You can trade it for a Directory of 2,000 Commercial Real Estate Lenders.

Are you working on a purchase money commercial loan?  Are you frustrated because the bank will only lend your buyer 58% of the purchase price?  Remember, Blackburne & Sons will add its equity dollars (called preferred equity) to your buyer's 25% down payment to make your down payment large enough to satisfy the bank.

Topics: Property on a hill