Commercial Loans and Rising Interest Rates For the Next 30 Years 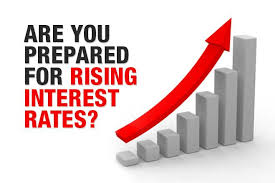 I have good news and interesting news.  First the good news.  Eighteen months ago I predicted that the next seven to ten years would be the most wonderful economic time in the history of the United States.  I still confidently stand by that prediction. Keep wearing your shades because the future remains fabulously bright.

"But George, the GDP is slowing.  Consumer confidence is slipping."

As they say in the gangster movies, "Forget about it." Remember, the U.S. economy lost thousands and thousands of oil extraction jobs when the Saudis flooded the market with oil. Nevertheless, the U.S. economy continues to grow.  It's funny, but just when the country needed some good news to jump-start the economy, shale oil came along.  Now that we no longer need the "push", it's okay for shale oil development to slow down a bit.  Makes me wonder whether some secret cabal of intellectuals knew that it had this card (shale oil) to play and chose the perfect time to play it.  Naw. What's that old saying? "Three people can keep a secret ... if two of them are dead."

Now for the interesting news:  I think it's possible that interest rates have just made a historical direction change.  I am not talking about some minor fluctuation.  I am talking about a direction change as important as when the prime rate first started to decline from 21.5% in 1982.  Interest rates would continue to decline for the next 33 years!

We have all been waiting for Janet Yellen and the Fed to finally start to raise interest rates.  This week the market beat her to the punch.

If you will think back to my earlier blog posts, you will recall my astonishment and awe when I announced that the interest rate on certain government bonds in Switzerland, Germany, and Sweden had actually gone negative!  Bond investors were so nervous about the future that they would forgo all interest payments and even pay certain European countries a tiny fee to hold their money for five years.

This month that strange, strange situation changed dramatically.  Interest rates on the most gilt-edged European bonds suddenly jumped from negative to sharply positive.  Is this bad news?  Absolutely not!  It's just one more sign that much is wonderful in the world.

How can it possibly be good news that interest rates are destined to trend slowly, but steadily, upwards for the next 33 years?  Answer:  Because it means that disinflation has finally come to an end.

"But wait, George, tell me again why it's a good thing that inflation has just returned and that the rate of inflation will actually be picking up speed over time?  That sounds like horrible news to me."

The return of inflation is therefore a very positive sign for both the U.S. and Europe.  If inflation is picking up, it means that business owners are finally feeling confident enough to start borrowing to modernize and expand their businesses.  Hooray!  By the way, my commercial mortgage portal just had its best month in seven years - further evidence that borrowers are feeling confident enough to borrow.  C-Loans closed a ton of deals - including a $5.2MM deal and an $8.3MM deal.

Interest rates in Europe just spiked, despite the best efforts of the European Central Bank, because many of the bigger countries in Europe are picking up economic momentum.  Shockingly, both France and Spain - once considered zombie economies - just posted big GDP gains.

Just because inflation is destined to rise, you should NOT rush out and buy gold.  Everyone thinks that gold is a hedge against inflation.  Uh, not so much.  Gold is actually a hedge against deflation.  (Shocking, huh?).  The reason why is that during times of deflation, the biggest fear is that companies or countries issuing the bonds will default.  Investors suddenly want to own something that cannot default.  Gold is a hard asset that cannot default.

This is one more reason why interest rates on gilt-edged bonds from rock-solid European countries suddenly spiked this month.  Why be content with a negative yield when the world clearly is NOT coming to an end?

Once again, here is my earth-shattering prediction:  Both inflation and interest rates have just made a historic turn.  Both will trend upwards for the next 20 to 30 years.  Time will tell whether my crystal ball is right.

If you click on the link below, you will be taken to a web page that you can forward to your banks.  If they sign up as lenders with C-Loans, we'll immediately give you a free training course, plus $250 every time they close a loan for C-Loans, Inc.