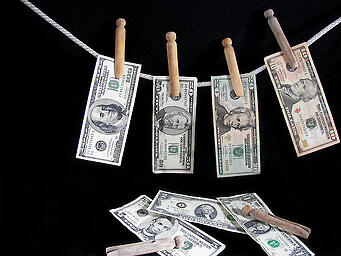 Our commercial hard money mortgage company, Blackburne & Sons, is making a really interesting commercial loan this month.  We are making a $1.6 million loan to the owner of two large apartment buildings so that the owner can take advantage of a discounted pay-off (DPO) being offered by the bank.

Now the really interesting thing about the deal is that the bank would not discount the four existing  commercial loans that it has with the borrower ... directly to the borrower.  They agreed to sell the four notes and mortgages to Blackburne & Sons at a discount, but not to the borrower.  Huh.  Kinda odd ... but whatever.  We get to make a nice loan fee on the deal.

So this complicated escrow will go as follows:  Blackburne & Sons, in escrow, will buy the four mortgages.  Then we will simultaneously sell these four mortgages to the borrower at a discount (they total around $2.3 million) using a brand new blanket loan of $1.6 million on both apartment buildings.

This deal is what is known as a brainer deal, as opposed to a no-brainer deal.  A no-brainer deal is a commercial loan that is so obviously good that the lender doesn't even have to think about it.  You should make a note that Blackburne & Sons is owned by a real estate attorney with 34 years experience in commercial mortgage finance.  If your commercial loan is fundamentally excellent, but the deal is just a little complicated (a brainer deal), we may be the perfect commercial lender for you.

Now we finally get to the point of today's article.  One of the four mortgages that we are buying in escrow is an open-ended mortgage.  An open-ended mortgage is a commercial loan with no fixed loan amount.  The bank might loan the borrower $600,000 to start with and then increase its loan amount to $2 million at a later date.  Junior lenders are put on notice, by the language in the mortgage, that the senior lender could increase its loan amount to $17 bazzillion without losing its seniority position.

Open-ended commercial mortgages are extremely rare.  I haven't seen one in almost two decades.  Open-ended mortgages are a lot like commercial lines of credit.  A line of credit is a form of debt where the borrower can borrow a certain amount of money, pay some or all of it back, and then, as the borrower needs it, borrow the money right back again, up to a certain loan amount.

The difference between a line of credit and an open-ended mortgage is that a line of credit has a fixed, maximum loan amount.  For example, the borrower might be authorized to draw down as much as $200,000 - but no more than that.  On an open-ended mortgage, the bank - at the bank's option - can increase its loan amount to $17 bazzillion, without recording a new mortgage and while maintaining its senior position.

Now a bank might offer a business line of credit, partially secured by a second mortgage on the borrower's owner-user commercial property, but banks almost never make such loans for anyone other than good bank customers.

A good bank customer is a company that keeps large deposits at the bank.  For example, Blackburne & Sons is a good bank customer because we service about $50 million in hard money commercial loans.  Our loan servicing trust account (not our money) contains, on average, well over $400,000.  The bank loves us because it doesn't have to pay a dime in interest for those trust  deposits.  Therefore, if we ever applied for a commercial line of credit, the bank might make us the loan, secured by our little office building in Indiana; however, it would almost never make such a loan to the public.