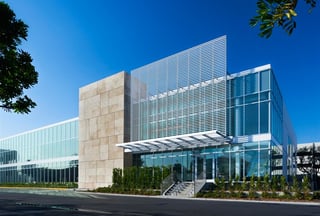 Today you will learn a new financial ratio, the New-Money-to-Old-Money Ratio.

This was the era of the see-through building.  A see-through building was a newly constructed commercial building, with no tenants and hence no tenant improvements.  It was just an empty shell, and if you looked through the windows, you could see all the way through to the other side.  Hundreds of huge, see-through, office towers could be found in Houston, Denver, and other large cities across the country.  Developers couldn't find any tenants for their beautiful new architectural monuments.  Commercial construction lenders - typically S&L's (savings and loan associations) - lost billions of dollars during the 1990-1991 recession, leading to the Savings and Loan Crisis, where almost 1,100 out of about 2,300 S&L's went bankrupt.

Anyway, in the early 1990's, everyone thought that the depression would be limited to just the Oil Patch states; but then the Eastern part of the country fell into a severe recession.  Everyone in California was sure that the rolling depression would never hit California because Silicon Valley was rocking and millions of people were moving to California.  "We are immune," said many Californians.  We weren't.  In 1991 the rolling commercial real estate depression hit California, and commercial real estate values fell by - you guessed it - 45%.

If a lender is actually going to make a commercial second mortgage, he needs to make sure that the first mortgage payments are not impossibly large.  Imagine if you made a $400,000 second mortgage behind a $10,000,000 first mortgage on an $18 million apartment building.  At first glance, this looks like a gorgeous deal.  It's only 57.8% loan-to-value.  Wow.

Therefore commercial second mortgage lenders developed a financial ratio to warn themselves away from making such a mistake.  It is called the New-Money-to-Old-Money Ratio.

The New-Money-to-Old-Money Ratio is defined as the size of the proposed second mortgage divided by the size of the first mortgage, the dividend (result) being multiplied by 100%.

The New-Money-to-Old-Money Ratio should always be larger than 33%.

Let's plug in the numbers from the example above.

Clearly 4% is way-way less than 33%.  It would be reckless to make such a second mortgage, even though the apartment building might be a very nice one and even though the loan-to-value ratio was less than 58%.

Poof!  Commercial second mortgage lenders lost billions of dollars and exited the business for good.  They have never come back.  To this day very few commercial lenders will therefore make second mortgages.

To make matters worse, a change in Federal law (the Garn-St. Germain Act) had recently clarified that the acceleration clause contained in the mortgages of virtually all bank first mortgages was enforceable.  An acceleration clause is the section in a mortgage that says if the borrower sells the property or places a second mortgage / mezzanine loan on the property that the bank can immediately demand to be paid in full.

Another huge reason why so few lenders will make commercial second mortgages is because the moment they place their mortgage on the property, the underlying first mortgage lender can accelerate his loan.  If that happens, the holder of a $400,000 second mortgage, for example, might suddenly have to come up with $1 million (or $10 million) to pay off an accelerated first mortgage.  Yikes.

In real life, this doesn't happen.  Almost invariably the seller lacks the financial resources to keep the first mortgage current.  The bank ends up foreclosing and wipes out the seller's second mortgage.

But wait, it gets even worse.  When the bank does foreclose, almost invariably it finds that the property has been allowed to fall into a dilapidated condition.  How could this happen?  The borrower has been using the dough earmarked to keep the property maintained to make the second mortgage payments.

As a result, you will almost never find a commercial bank willing to allow the seller to carry back a second mortgage.  Banks always want cash-to-loan; i.e., no second mortgages.

Do you have a commercial loan that deserves to be financed by a life company, bank, or conduit?

Keep looking for bankers who make commercial loans.  You can parlay the contents of a single business card into a free directory of 2,000 commercial real estate lenders.

We here at C-Loans, Inc. have a vested interest in getting you pre-registered on C-Loans.com.  Registration is just a fancy way of saying to give us your contact information, so future lenders can reach you.  We want you in a sprint start so that the next time you run across a commercial real estate loan, you can quickly enter it into C-Loans.com.  To encourage you to pre-register, we are giving away a free Commercial Mortgage Underwriting Manual, a manual we sell separately for $199.

Are you ready to finally learn commercial real estate finance?  It's a rare commercial lending conference when one of my former (video course) students doesn't come up to me and thank me for this course.

Did you learn something today?  Want to receive two free lessons in commercial real estate finance every week?

Got a buddy or a co-worker who would benefit from free training in commercial real estate finance?

Why Commercial Second Mortgages Are So Rare - Part I

Later in the week I will share with you the ratio known as the Old-Money-to-New-Money Ratio.  Today, however, I will explain why very few commercial lenders make commercial second mortgages.

The commercial real estate recession (heck, it was a depression) lasted for five long years.  Wonderful, old commercial hard money lenders took painful losses in second mortgages.  In most cases the second mortgage holders were completely wiped out, as they ran out of money with which to keep the first mortgage current.  A great many commercial second mortgage companies - companies run by honest, competent men that had been in business for decades - simply went out of business.

Tomorrow I will write about some serious legal problems facing commercial second mortgage lenders - things like the due-on-encumbrance clauses and prohibitions against alienating title in any way; e.g. mezzanine loans and preferred equity.