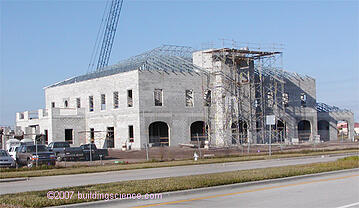 Imagine the following scenario:  Your commercial loan balloons in November, but every life company, commercial bank, and savings and loan association in town has already used up all of their commercial loan allocation for the year!  You might have to pay the ballooning bank a two-point extension fee, just to extend the loan until the first quarter of the following year, when the nearby commercial lenders got a new allocation of commercial loan money!  Therefore construction lenders always demanded a forward takeout commitment.

A permanent loan on a commercial property will typically have a term of 5, 7, or 10 years; although SBA loans and USDA Business and Industries loans (partially-guaranteed by the Federal government) will sometimes be fully-amortized loans over 25 years.  If a commercial first mortgage loan does not have any amortization; i.e., it's an interest-only loan, the first mortgage loan is usually considered a mini-perm.  Mini-perms typically have interest-only terms of two to three years.

A forward takeout commitment is nothing more than a letter promising to deliver a takeout loan at some time in the future, typically 12 months or 18 months out.  Forward takeout commitment letters typically cost the developer one or two points, just for the letter itself.  If the developer actually asked the lender to fund, there was typically a loan origination fee of another one or two points.

Did you know that if a developer paid for a forward commitment letter that he was NOT required to take down the lender's takeout loan?  For example, let's suppose a life insurance company issued a 12-month forward takeout commitment for $2 million at 5.0%.  Then let's suppose the developer completed the office building, and because Lockheed Aerospace opened a new plant in town, the developer filled the building at much higher rents than he was projecting.  Bank of America then offered the developer a $2.2 million takeout loan at 4.75% and a loan origination fee of just one point.  Most developers would jump all over the Bank of Amercia deal and would politely tell the life company that they were not taking its loan.  The life company might be ticked off (and might internally blacklist the developer), but there was nothing that the life company could do.

The local banker knows the local commercial real estate market.  He might look at the developer's plans and financial projections and says, "I'm sorry, Bill, but you're projecting office rents of $36/sf here in podunk Midwest City, Oklahoma.  There is no way folks here can afford to pay that kind of rent.  This deal is a non-starter."

Or the local banker might say, "Okay, you're projecting $28/sf here in Arlington, Virginia (the fourth largest city in the state).  That looks very do-able.  Go get yourself a forward takeout commitment, and assuming you've contributed at least 20% of the total cost of the project, I'm sure our bank would be willing to make the construction loan."

The forward takeout commitment might read, "Bill, if you build this office building according to plans and specifications, and you get it 95% leased up at your projected rent of $28/sf, we'll fund a $2 million takeout loan to pay off your construction lender.  You must hand us two points before we give you this commitment letter, and there will be an additional 1.5 point loan origination fee if you ask us to actually fund the loan."

Bill, the developer, hands the life insurance company a check for $40,000 (two points on a $2 million commitment).  He then takes the forward takeout commitment letter to a bank, located close to the proposed property, and obtains what is known as a covered construction loan or a closed-end construction loan.  In other words the construction lender knows exactly who is going to pay it off.

This was the world of commercial real estate finance before President Richard Nixon took the United States off the gold standard and opened the bottle to the Inflation Genie.