Commercial Real Estate Loans Are The Kiss of Death for Banks

The More Commercial Mortgages a Bank Has in Its Portfolio, the Higher Its Chances of Being Closed By the Feds

No wonder its so hard to get a commercial loan from a bank these days! 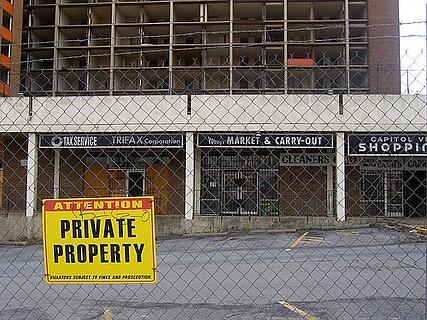 So what should a borrower or a commercial mortgage broker do?  He will probably have to submit his commercial loan request to scores and scores of banks before finding a commercial lender willing to make the loan.

He then puts a check mark next to six banks and presses, "Submit." Within minutes bankers will be calling him or emailing him offers.  And C-Loans.com is free!

I have been in the commercial mortgage business for 30 years now, and these are the worst of times.

I used to think that 1982 was bad. In 1981 Fed Chairman Paul Volcker, determined to break the back of inflation, raised the prime rate to 21.5%. Surprisingly, borrowers still sought commercial loans. Real estate was still appreciating, and cash-hungry borrowers were still willing to accept a commercial loan at 16% to 23%. At the same time, the banks and thrifts (savings and loan associations) would still consider a commercial loan, if the commercial loan made sense.  Nevertheless, business was horrible.

But as bad as things were in 1981, the commercial loan market simply disappeared in 1982. By then the Fed had broken the back of inflation. The inflation rate tumbled from 16% to less than 6%. At the same time, the Fed started to quickly ease. The prime rate began to fall at the rate of 1/2% to a full 1% per month.

I hate it when interest rates fall! No one wants to borrow. Why borrower at 15% today when the rate will be 14% or maybe even 13% in six more months. So borrowers procrastinated. Our commercial loan office became a tomb. I called my old buddy, Bill Owens of Owens Financial Group, and begged him to tell me what I should do. "George," Bill commented with his wry humor, "sometimes all you can do is go fishing." For the rest of the year commercial lending activity was almost non-existent.

But at least in 1982 the problem was just on one side.  Borrowers were procrastinating.

What about today? "It's deja vu all over again."  Except this time, neither lenders nor borrowers want commercial loans.

Borrowers don't want commercial loans because they are not investing. Why buy commercial real estate today when prices will only be cheaper tomorrow? Business owners aren't pulling cash out of their buildings because they are already cutting back on their existing manufacturing capacity. Why invest more in plant and equipment?

"But George, what about the hundreds of billions of dollars in ballooning commercial loans that we keep reading about?" The banks and conduit loan servicing agents are simply extending these loans for a few years.  Why foreclose on an otherwise performing loan? Commercial lenders don't need any more commercial properties to manage.

So where does this leave us? The commercial loan market is now frozen to a standstill. Very few new commercial permanent loans are being written, and commercial construction lending is essentially non-existent.

If you do happen to need a commercial loan:

1. If it's a bankable deal, you can submit your deal in just four minutes to hundreds of commercial lenders by using C-Loans.com.

2. If you need a commercial permanent loan of less than $1.5 million, please call me, George Blackburne III, on my cell at 574-360-2486 or email me a package at george@blackburne.com